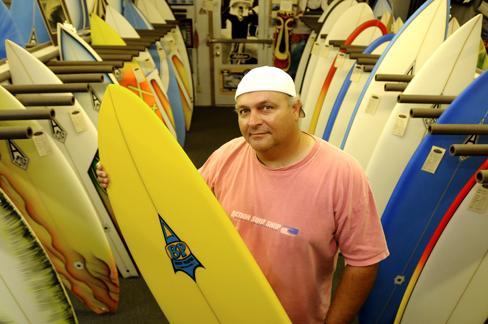 “The custom surfboard
has come back to life!”

North Carolina was not always considered a prime surf destination.  With colder waters than the Florida coast, it did not originally occur to surfers that some of the best breaks could be found along sites such as Atlantic Beach or the Outer Banks.  It was word of mouth and the fame gained by local professional surfers, such as Buddy Pelletier and Bob Webb, that eventually drew so much attention to the surf community of the North Carolina coast and acted as a catalyst for the desire to have experienced board shapers in this location.  Action Surfboards and Surf Shop was one of many of the first locally owned and operated surf companies.

Action Surfboards was established in 1980 when founder Bob Webb had begun to learn the ins-and-outs of the board shaping industry, gaining his knowledge from working with a surfboard manufacturer that allowed him to study the trade on the Florida and Hawaii coastlines.  In that same time period, Webb also gained many connections which would become valuable to the Action brand name.  In 1989 Webb opened Action Surf Shop’s storefront in Morehead City when he returned to his hometown after living in Florida as a pro surfer and board shaper.  After opening its doors, Action quickly gained momentum as a premier surf brand for the East Coast; to this day Action is recognized as a global brand.  Through focusing on good design by treating board shaping as a performance art and craftsmanship, the company has managed to produce 25,000+ boards over the past forty years.

Another portion of Action’s success comes with the consumers.  Due to Webb’s status of having been a pro surfer, many of his customers became loyal to the brand out of the respect they carried for a North Carolina native bringing his business back to the North Carolina coast.  Over the years Webb has returned the favor of this loyalty by supporting rising local athletic talent in both surf and skate competitions.  He has even shaped particular board styles that are named after some of the best surfers in the sport from the surrounding area.

At Action, we pride ourselves on having the best boards for local conditions around the world.   All Action surfboards are designed by Webb.  If you don’t see what you are looking for in stock, Webb can custom shape a board just for you.